Nute Gunray was one of Palpatine’s greatest pawns during the events of the prequel trilogy, and previews for Darth Vader #7 reveal his fate.

Star Wars has revealed what happened to Nute Gunray’s decaying corpse after his death in Star Wars: Episode III – Revenge of the Sith. Viceroy of the Trade Federation, Nute Gunray was introduced in Star Wars: Episode I – The Phantom Menace as Palpatine’s pawn. He had forged an unwise alliance with the Sith, one that led him to launch an ill-fated invasion of the planet Naboo.

The Trade Federation remained a force to be reckoned with throughout the prequel trilogy. As shown in Star Wars: The Clone Wars, the Trade Federation initially played both sides during the Clone Wars, profiting from the conflict. As the years passed, though, they became increasingly drawn to the Separatist cause, and in the end joined up. Nute Gunray was among the Separatist leaders sent to hide on the planet Mustafar in Revenge of the Sith. The Separatists knew Darth Sidious’ plans had built to a climax, and they expected to receive a reward. Instead, Palpatine sent his new apprentice Darth Vader to Mustafar to slaughter them. Their usefulness had come to an end.

Lucasfilm has recently released a new preview for the upcoming Darth Vader #7, by Greg Pak and Raffaele Iencowhich, which sees a wounded Darth Vader revisit the site of the Separatist massacre. It reveals the desiccated corpse of Nute Gunray had simply been left to rot. 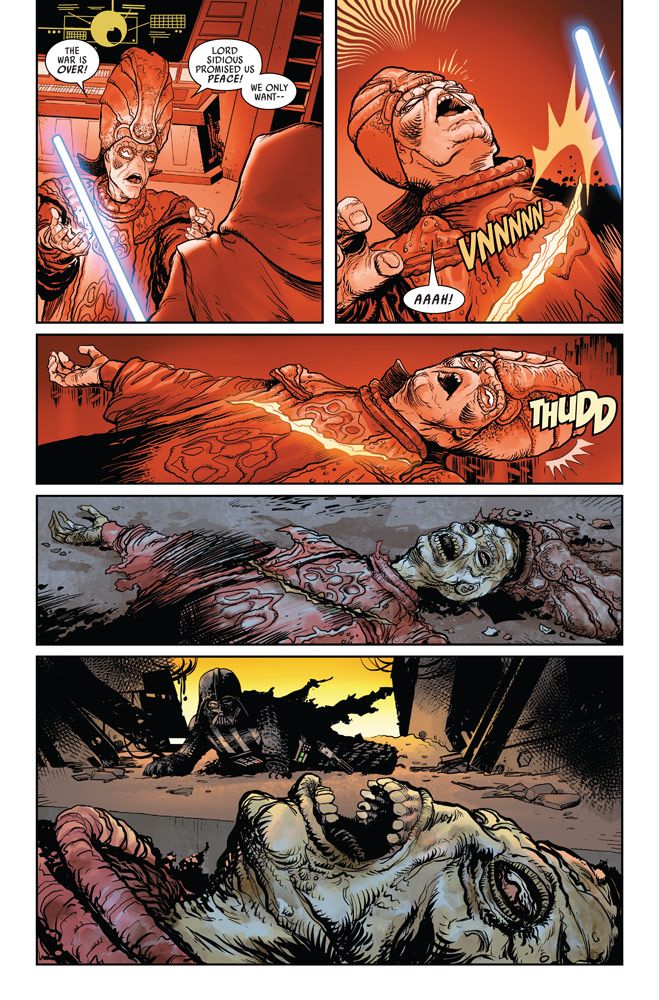 This certainly demonstrates Palpatine’s disdain for his former pawns, but it’s also important to understand there was actually a strategic region these bodies were abandoned. The Clone Wars came to an abrupt conclusion with Order 66 and the slaughter of the Jedi, and the Emperor blamed the Jedi for the entire conflict. He wanted the public to believe the Jedi had orchestrated the Clone Wars, and that the droid armies shut down as soon as the Jedi had been killed. It suited his purpose to ensure the galaxy never learned what had happened to the Separatist leaders. After all, the lightsaber wounds would hardly fit with the official narrative.

With Nute Gunray out of the way, the Trade Federation was swiftly nationalized, and its accounts were plundered. The Trade Federation was presented to the galaxy as a symbol of corruption, with the Empire’s ascension allowing the past to be swept away. Unfortunately the galaxy still had other war profiteers, and similar companies remained active even to the time of the sequel trilogy, as revealed in Star Wars: The Last Jedi.