Star Trek: Discovery season 3 may have dropped a major clue to the cause of the Burn — was it triggered by the mystery music?

Star Trek: Discovery‘s mysterious music could actually be the cause of a galactic catastrophe called “The Burn” that caused most dilithium in the galaxy to become inert. The crew of the USS Discovery have gone on the ultimate voyage of discovery, traveling 930 years in the future. There, they have been shaken to discover the galaxy has been drastically changed by a calamitous event remembered as the Burn.

One fateful day, most of the dilithium in the galaxy suddenly became inert. The Federation never discovered the cause — they have countless theories, but none of them seem to be considered persuasive — but the effect was disastrous. Dilithium is used in a starship’s warp core to control matter/antimatter reactions, and according to Burnham “any ship with an active warp core detonated.” Most starships were destroyed, and the death toll numbered in the millions. The disaster caused a major change in galactic politics, because it became impossible for any one power to control a large area of space; there wasn’t enough dilithium to power them, even if they had enough starships left in the first place.

Related: Star Trek Discovery: Every Change To The Galaxy In The 32nd Century Future (So Far)

And now Star Trek: Discovery has introduced another mystery, one that at first glance appears disconnected. Burnham has noticed that the entire galaxy has spontaneously learned a beautiful, haunting piece of music. This is particularly odd given that, in a post-Burn galaxy, people shouldn’t be able to transport music from one side of the cosmos to the other. Though she doesn’t know it, it could be that Burnham has spotted a major clue to the Burn itself.

Understanding What Dilithium Is In Star Trek 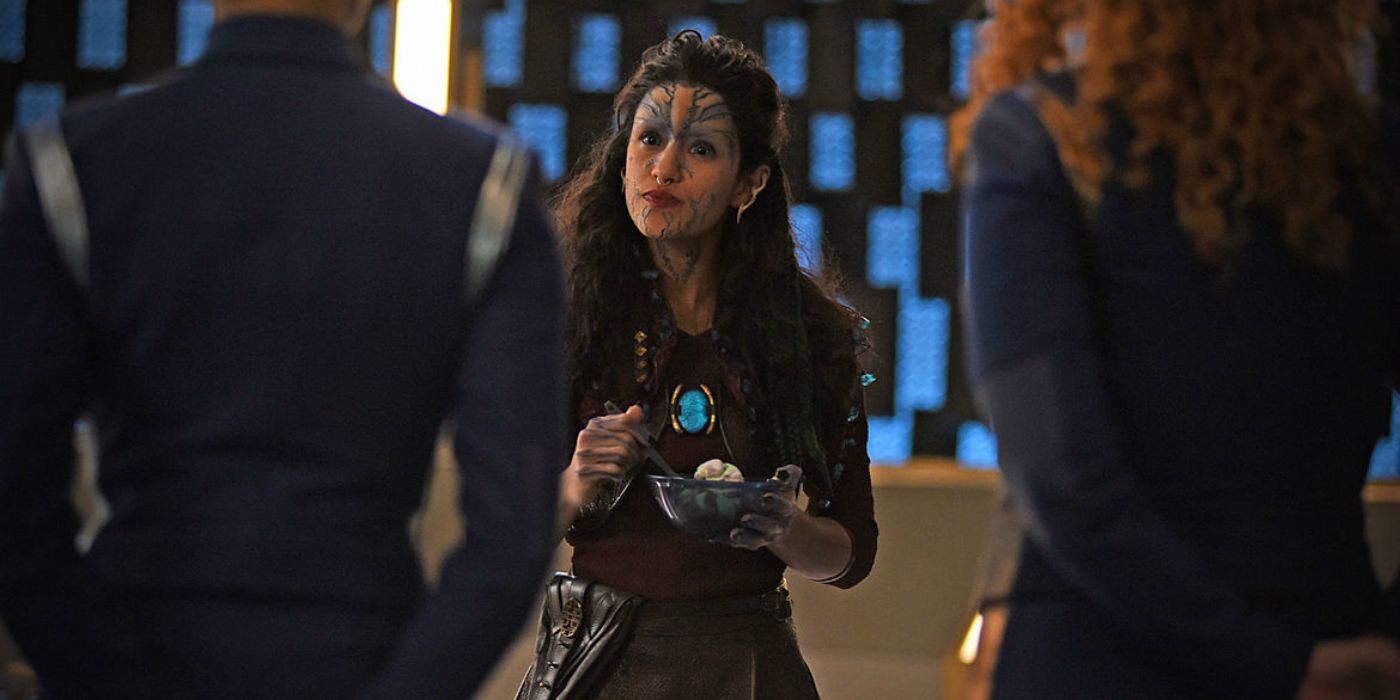 Star Trek has always had something of a reputation for indulging in technobabble, but there’s actually a fairly consistent pseudo-science beneath it. Dilithium has frequently been at the heart of that technobabble, and in order to understand the Burn, viewers naturally first need to understand the nature and properties of dilithium. In Star Trek, this is a relatively rare and naturally-occurring crystal that exists on only a handful of worlds, and it is much sought after by spacefaring races because it plays a critical role in starship drives. According to Burnham, dilithium became scarce about 200 years before the Burn, and the Federation tried — and failed — to create alternative warp drive designs. This is curious because Star Trek: Discovery season 2 reminded viewers recrystallized dilithium can be reused, but presumably this process does result in some sort of degradation over time, meaning even recrystallized dilithium can be exhausted.

Crystals Can Change Properties Due To Sound Waves

According to Burnham, something caused almost all the dilithium across the galaxy to become inert at the exact same time, and one intriguing possibility is that the change was caused by a sound. Crystals are inherently fragile, and can actually be shattered if they are subjected to the correct resonant frequency. Curiously, though, there is also evidence that some crystals can undergo very different transformations when exposed to the right sound. Rather than simply break apart, they can actually change properties. Scientists have barely begun to explore this idea, and few Terrestrial crystals seem to be able to be changed in this way; however, dilithium is a fictional, non-Terrestrial crystal, and thus it could well be one crystal that can be rendered inert when exposed to the correct sound.

The mysterious music Burnham heard could be part of this. It’s possible whatever sound caused the dilithium to change properties was partially within conventional hearing ranges, and that it was experienced as haunting and melodic music. The people of the galaxy would remember this tune as the last thing they heard before the galaxy went crazy, and thus for the survivors of the Burn it would be recalled with a sense of poignant nostalgia. Most would simply assume they’d heard somebody playing it on a speaker; nobody would connect it to a galactic catastrophe. And composers and musicians would naturally attempt to reproduce the sound, simply because it evoked such a strong emotional reaction.

What Was The Cause Of The Mystery Music?

But how would a sound propagate through the entire galaxy at once? There are two possible scenarios, and both would fit well with the themes seen in Star Trek: Discovery season 3. The first possibility is that this was done via the mycelial network, the discrete subspace realm that is used by the USS Discovery to travel across the entire galaxy instantaneously. The Federation had forgotten the existence of the mycelial network, because all record of the experimental spore drive had been erased from their records. They would not have known to look there — but the crew of the USS Discovery would be well-suited to figuring out something is happening in mycelial space. Indeed, there is one piece of circumstantial evidence supporting this idea; the mycelial network binds the entire Multiverse together, and apparently the Mirror Universe once ruled by Empress Georgiou has become rather more distant in Multiversal terms, suggesting something is happening in the network.

Alternatively, it’s possible the music was an extrusion into our space by something from another dimension. This idea would evoke memories of the classic Flatland illustration: imagine a two-dimensional world, a “Flatland,” suddenly influenced by a three-dimensional object. The inhabitants of this two-dimensional world would be unable to properly interpret the object, and its properties would appear impossible. Perhaps the sound that destabilized dilithium is from a realm with four, or five, or still more, dimensions, and consequently it was experienced in such a strange — and, in this case, destructive — way. Interestingly, in Star Trek: Discovery season 3, episode 5, Saru openly discussed the concept of depth, which could perhaps be developed to point towards this idea.

Star Trek: Discovery has confronted Burnham and the crew of the USS Discovery with not one galactic mystery, but two: the Burn and the mysterious music. It’s logical to assume the two are connected, and frankly that’s a good idea from a narrative viewpoint, because one of the musicians to know this music is in fact the Discovery’s new crewmember Adira. Thus Adira would become important, not just as a guide to the Federation, but also as a potential asset in helping solve the dual mysteries. The precise cause is still uncertain — but they have simply got to be connected.